If you love to take your dog on a pup-friendly vacation, you’re not alone. According to the National Pet Owners Survey, nearly 40% of pet owners bring their dogs with them on vacation. You can even take your Dog to the beach with a dog-friendly vacation rental, a pet-friendly park, and plenty of toys to share.

Ready to explore? Here’s where to find dog-friendly beaches in Maine. 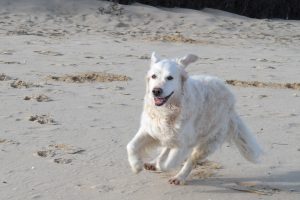 Take a stroll on the boardwalk, play along the rocky shoreline, and tumble on the white, sandy beach. Make a picnic from your nearby vacation rental home and spend the day right on the beach.

Ready to pack-up and head to Maine? Find a dog-friendly vacation rental near Kinney Shores here. 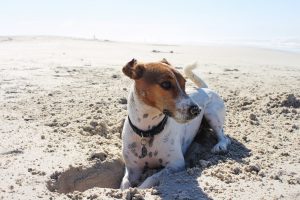 Come and play on Willard Beach in South Portland, Maine, where the water is refreshingly cold, and the beach is ready for exploring. Enjoy a sandy, pebble-strewn beach tucked between Fisherman’s Point and the Southern Maine Community College campus. 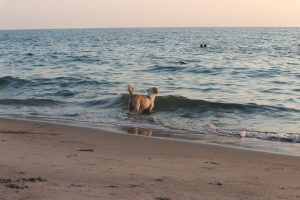 Dogs love the wide beach at Wells Beach with tide pools during low tide. After a few hours of playing, head along the dunes to the nature area and fish for tonight’s dinner at the jetty. Dogs are allowed off-season all day.

Dogs are allowed before 8 a.m. or after 6 p.m from June 16 through September 15 on Wells Beach. During off season-dogs are permitted all day on leashes. 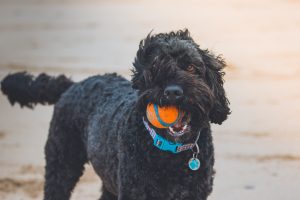 Make a date with your pup to explore Fort Foster Park on Gerrish Island with sandy beaches and an expansive rail system. Dogs play and stroll the trail where local wildlife and fish encroach the shoreline.

Dogs are allowed on a leash between 10 a.m. and 8 p.m. on weekends in May and September and every day from Memorial Day to Labor Day. Pooper scooper rules are also in effect on Fort Foster Park where owners take their dogs solid waste with them when leaving the park. 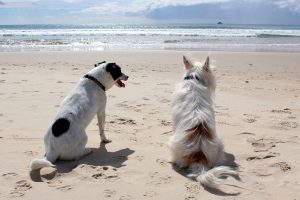 Enjoy Kennebunk Beach for a picturesque, peaceful beach along Maine’s rocky shoreline. Along with other dogs to play with, pups love venturing into the water and watching Maine surfers riding the waves.

Kennebunk Beach welcomes dogs before 9 a.m. or after 6 p.m. during summer and anytime off-season. Leashes are required. 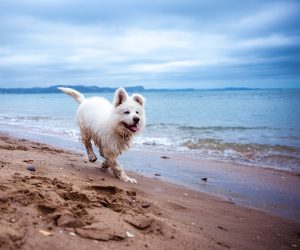 Pups play along the rocky, pet-friendly beach of Seapoint Beach. Local parking is for residents only during peak season, so walking from your vacation rental or parking a few blocks away is key.

Dogs are welcome on Seapoint Beach before 9 a.m and after 5 p.m. from June 15 through September 10. During the off-season, dogs are welcome during all park hours. 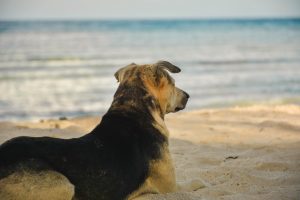 Short Sands offers a beautiful beach and recreation area for pups and owners to play. Spend the afternoon with a game of bech fetch with your pup before going home for a well-deserved nap. Come back for video arcade games, shopping, and a bite to eat while the sun sets.

Dogs can roam off-leash at Short Sands before 8 a.m. and after 6 p.m. from May 20 to September 20. During the off-season, dogs are welcome during all park hours. 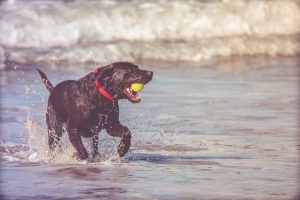 Explore the wide expanse of Long Sands for a mile of Maine’s white, sandy shoreline. Head over to the rocky areas to find tide pools and fellow furry friends. Stay and watch the sunset while dogs play in the Atlantic Ocean.

Dogs are only allowed on Long Sands before 8 a.m. and after 6 p.m. from Memorial Day through Labor Day weekend. Dogs are allowed during all park hours during the off-season. 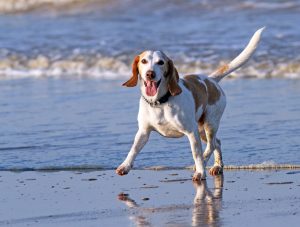 Visit during low-tide on Drake’s Island for ample space for dogs to run. After playing in the waves, explore the nearby Rachel Carson Wildlife Refuge with your leashed pup for some wildlife viewing. 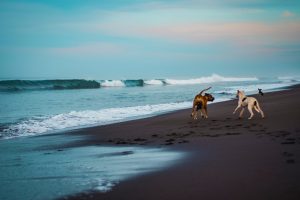 The small but popular East End Beach features a sandy, pebble covered beach near Portland’s Eastern Promenade. It’s the perfect place to end your urban walk, or before some of Maine’s best pizza.

Off-leash dogs are welcome  at East End Beach before 9 a.m and after 5 p.m. from Memorial Day through Labor Day. During the off-season, dogs are allowed to play off-leash all day.

Make the most of your vacation and hit several dog-friendly beaches in Maine for a day in the surf. Remember to check hours and park regulations in advance, as rules can change.

Get your free guide "7 Amazing Things To Do In Maine (Even Most Locals Don't Know About...)"

Your information is 100% safe.

Something went wrong. Please check your entries and try again.